The Rules of the Game are quite similar to those of traditional soccer/football with adaptations related to a faster pace, higher scoring and safety considerations. Rule modifications are only allowed upon written notification and consent of the RollerSoccer International Federation (RSIF). The Rules of the Game are summarized below and the full text of the Official Rules is available to all registered RSUSA members upon request.

Regulation RollerSoccer play areas are surrounded by barriers, also known as dashers or boards, similar to those used in hockey. Barriers speed up the play by keeping the ball in play and allowing ricochet-passing opportunities. The RSUSA allows Club Affiliates to use alternative barriers, or no barriers at all, for beginner and recreational leagues.

How team can take control of the game?

How you, the player, can keep possession of the ball?

How to create space and opportunities for shots on goal?

How to prevent fast breaks and transition goals? 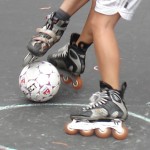 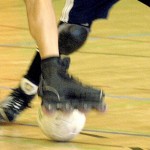